“The Hidden Tradition of Christian Magic” from the Order of Melchizedek Training Program. Learn more HERE.

That’s the Lauri that the outside world perceived. But, there was another Lauri lurking under the mask of the Cath-o-lick Girl!  This was Lauri the witch.  Mrs. Hodgson saw her when I flirted with Pat Gerber instead of listening to her lecturing us about all the ways we might say God’s name in vain.  Sr. Loretta saw her when I questioned the Church’s teaching on what happened to people who were not baptized.  Mr. Pavlock saw her when I tried to dot my i’s with hearts.  Mrs. Neff saw her when instead of tending to my math lesson, I was throwing superballs and watching them ricocheting off the ceiling, floor and blackboards with the naughty boys.  And Fr. (now Bishop) Doyle saw her when I challenged his believes on his clerical privilege (he had the balls to tell us got to go to heaven before us, simply because he was a priest, and regardless of his moral character….he thought he got a free pass!)

Learn more about the Order of Melchizedek Training Program, a training in Christian Magic HERE.

Now, don’t get me wrong.  I was mostly a good girl, too good in the opinion of many (I was only a little self-righteous!).  But, my true self could not help but come out sideways as I worked on being perfect so that I could earn the love and approval of my parents, my teachers, and ultimately, God.

My true self, found meaning in the mystical and the magical and while there could not have been a better place to grow up than in the Catholic Church that is all about mystery and magic – something was always missing.  While I wasn’t conscious of this at the time, I’m curious now to know if deep down I wondered why only the priests got to do the magic.  It seems rather unfair.  Only the priests got to turn the bread and wine into the body and blood of Christ, heal the sick, absolve sins, magically turn an ordinary child into a child of God, and exorcise demons.  What was up with that?

Thankfully, there were many things outside my Catholic experience that did speak to and reflect the magic of my Soul.  Samantha Stevens in Bewitched.  The Wicked Witch of the West.  HR Puffinstuff.  Mary Poppins and all the Disney fairy godmothers, evil queens and witches.  And Sleeping Beauty’s Maleficent – the best cinema villain – only because she was sooooo misunderstood.  How would you feel if all your sisters were invited to the ball but you were not?  I’d be pissed too!

So, when I became a grown up, many books and resources crossed my path that reflected and called forth the magic within that wanted to be know – the Mists of Avalon by Marion Zimmer Bradley, most notably.  Learning about the feminine magic of the mystical isle, set me off on a quest that has taken 26 years to complete (Saturn’s second return).  The winding and twisting path of discovering my magic took me into the exploration of Wicca, Celtic paganism, Neo-Paganism, Neo-Shamanism, the Mysteries of the Golden Dawn, Kabbalistic magic, Egyptian magic, the gods and goddesses of the Celtic and Hindu traditions, the Emerald Tablet, the Egyptian Book of the Dead, in-depth study of energy medicine, Chi Qong, Yoga, Bhakti, and the ancient and continuing tradition and practice of alchemy.  In my quest, I had devoured everything that came into my path that had to do with magic.  Oh, does Harry Potter count too?  I think it should!  Expecto Patronum!

Magic, I learned, was in my blood.  Everything I studied felt like a remembering.  But even after all this study, something still was missing.  While I appreciated all the tools I had gathered, practiced, learned and honed from all these different traditions, the Christian component was missing.  Or rather, the Jesus component.  Something deep within me said that my journey to magic would not be complete until I found the Jesus link. 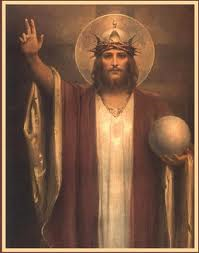 As it turns out, the Jesus link had been right in front of my nose the whole time:

There it was, right in front of my eyes.  Jesus was a priest according to the Order of Melchizedek.  Catholic priests are ordained into this order.  This is the priesthood activated within all believers through their baptism (and in my mind, by extension, anyone who might consider Jesus to be their teacher whether they are baptized or not.)

The magic I had longed for, searched for, and hungered for my whole life had been there all along in my teacher Jesus and within the Catholic Church in which I was raised.  The problem was, (and still is) that women and those called to intimate partnership through marriage are barred from this magic.

Then there is the problem of the secrets.  In the Catholic Church, all we see is the external Christian magic – the consecration of the bread and wine, the pouring of water in baptism, the laying on of hands in confirmation, etc.  In fact, the external magic may be all that remains in the Christian magic of the Catholic Church. My task has been to exhume the magic that I believe has been buried since the day that Christianity sold itself out to the patriarchy. When Christianity became a monarchy instead of the egalitarian and democratic experience that Jesus modeled (though remember, Jesus wasn’t a Christian he was a Jew), everything of the esoteric (and by association, the feminine) was set aside, and later condemned as evil.

Now, there may be a good reason for hiding away the magic.

First, there are the practical reasons:

Then there is the political reason:

My task has been to remember these ancient practices of Christian Magic that I believe were part of Jesus’ training through his experiences in Egypt, with the mystical orders of Judaism, and during his time in India among the great Hindu masters.  The reason Jesus was acknowledged as a priest in the Order of Melchizedek, is because these practices, like Jesus’ teachings, are not limited to one single religious belief system or practice, but are indeed, Universal.

Lauri Ann Lumby has researched the hidden tradition of Christian Magic and now makes it available through the Order of Melchizedek Training Program.  Learn more by clicking on the image below:

Online at your own pace!